I’m writing this article while on board my Germanwings flight from Cologne/Germany to Vienna/Austria where I’ll be attending the 2012 Experts to Experts Virtualization Conference (www.e2evc.com).

I know, this comes kind of late, but if you’re there and like to see me present on Citrix AppDNA 6 , then come watch my session today (Friday) scheduled to begin at 2:10PM.

I will try to update this article while attending other sessions, so that if you’re not in Vienna, you still know what we were talking about.

This is my second community event (after ICE Lingen 2011 www.ice-lingen.de), and the first for me to present at, so I’m really excited to meet all the people attending the event!

Keep following this article to stay up to date on the sessions I visit.

Alex’s welcoming was a bit delayed due to some misorganization on the hotel’s side.

RES then showed what they have been doing the last months and what can be expected to be released by them in the next couple of days/weeks/months.

They’re going to release the RES Workspace Manager 2012 and Hyperdrive in the next days and I think especially the latter sounds really interesting.

David Hald from SMSPasscode talks about the threats that are out there in the world and security breaches. Apparently RAS are protected by Spiderman ;)

A demo environment of SMSPasscode 6.1 (released last Monday) is available at demo.smspasscode.com

This was my session. I believe the video recording and PowerPoint slides will soon be available for everyone to download.

My feeling is that it went quite well. It’s my first time at E2EVC, so I can only guess ;)

The internet connection is still unavailable so I’m writing this offline, hoping I can upload the updates later on or tonight. Up until now all the sessions have been really interesting!

I don’t know much about AppSense, so most of the session is quite new to me.

I expected to hear something about their profile management solution, but that was left out completely. Guess that means that I have to go look myself.

Risks and Side Effects of Poor Network Design

Interesting session about network problems in a RDS environment, where “Flow Control” on Router actually slowed down the User expperience

How to crack a setup installer, which doesn’t want to install on your client. I honestly didn’t understand more than 2% ;) Most of the time it looked like Matrix, with HexEditors, IDAPro and lots of funny programs.

Alex (@E2EVC) just announced that the next E2EVC is going to be held in Hamburg (Germany) November 2nd to 4th.

Well this was an interesting session about User Environment Management. I will definitely have a look at it.

For more information on Pierre’s tool, look at CitrixTools.net or VirtualDesktops.info

The Bandwidth Matrix by @IngmarVerheij

Have to check the website, shown some interesting results during the session.

Stéphane talked about the new product CloudGateway by Citrix.

Java client fallback will not be possible in Receiver Storefront, but native HTML5 support will come.

It’s been a short night in Vienna and I’m already back in the InterCity Hotel.

ThinKiosk is a DotNet 2.0 application, which locks down the whole desktop and just presents the user with the configured Citrix WebInterface. It’s a free community tool available at www.andrewmorgan.ie/thinkiosk

This way the user is only able to work with the published desktop and do nothing more with his local desktop! 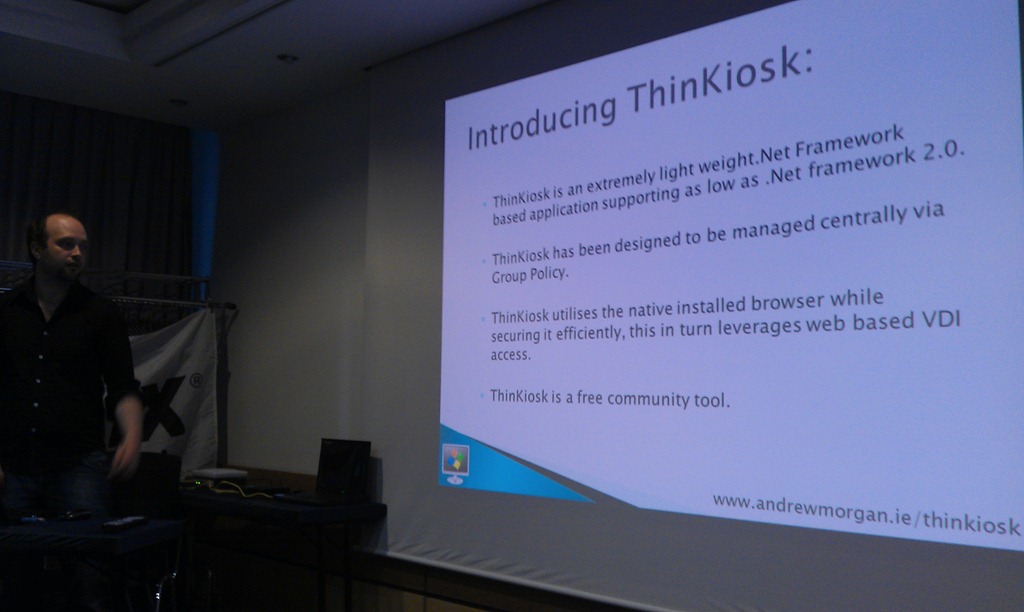 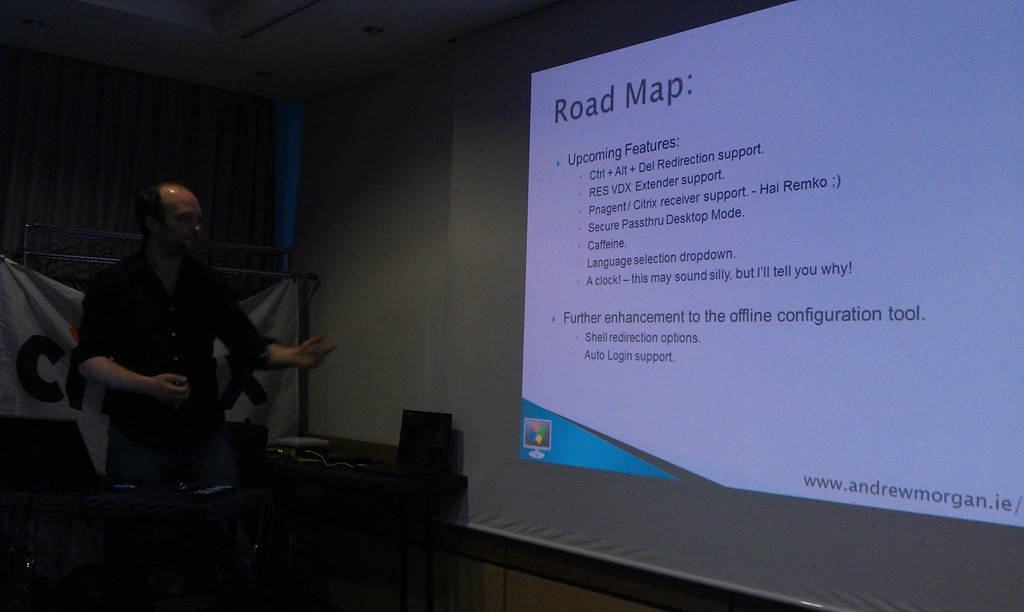 “How real is virtual” by @neilspellings

“Virtualization clients in enterprise, when to use what and why” by @keesbaggerman and @barryschiffer

Comparing women to Fat/Thin Clients? Interesting analogy in this session. They tested different thin/zero clients against a Fat Client. 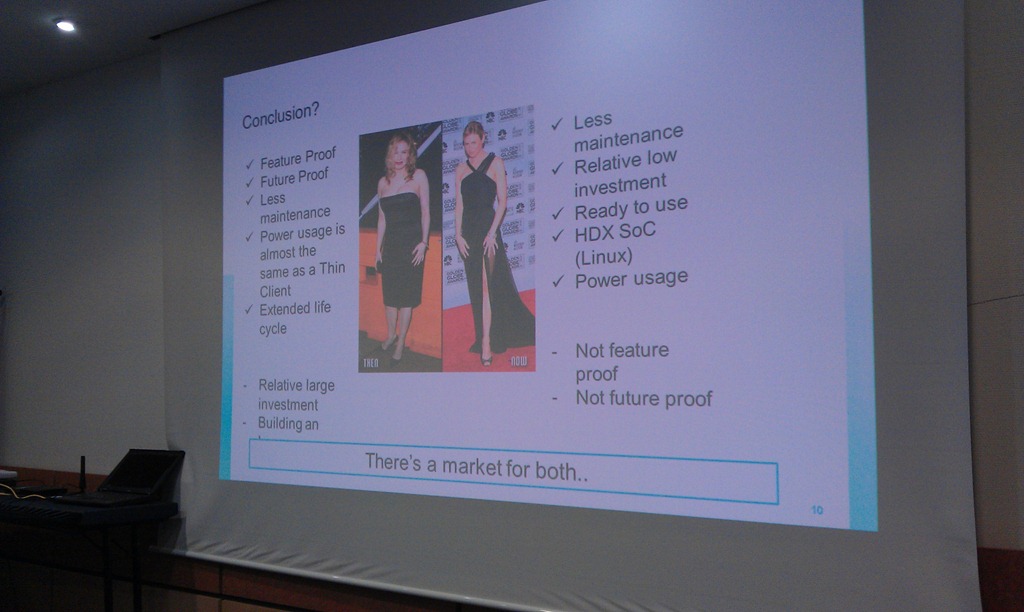 This was actually one of the coolest but scariest sessions at E2E. Remko demonstrated how easy it is to get any logged on user’s password from any XenApp or RDS session. 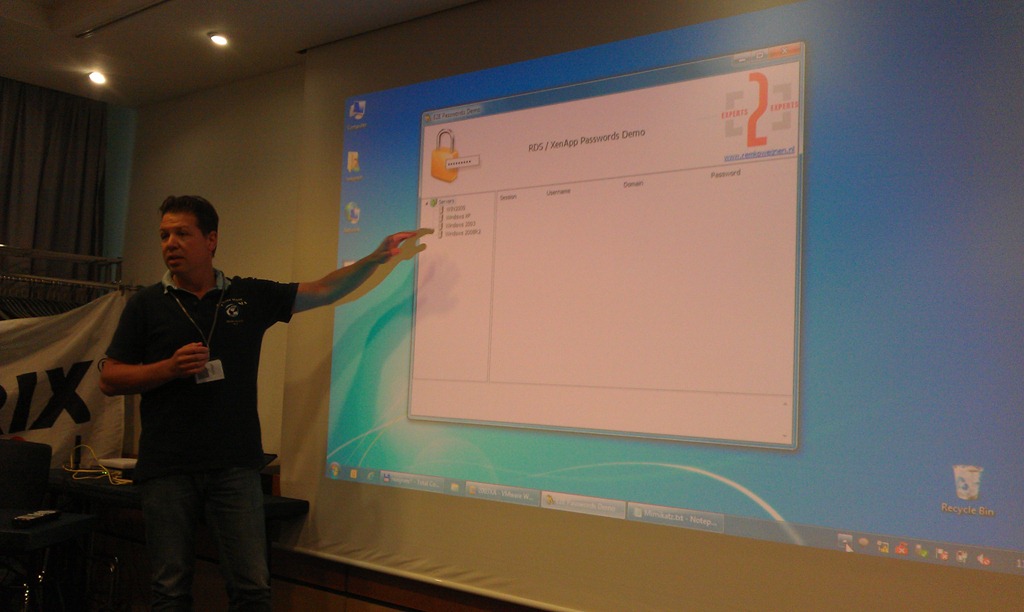 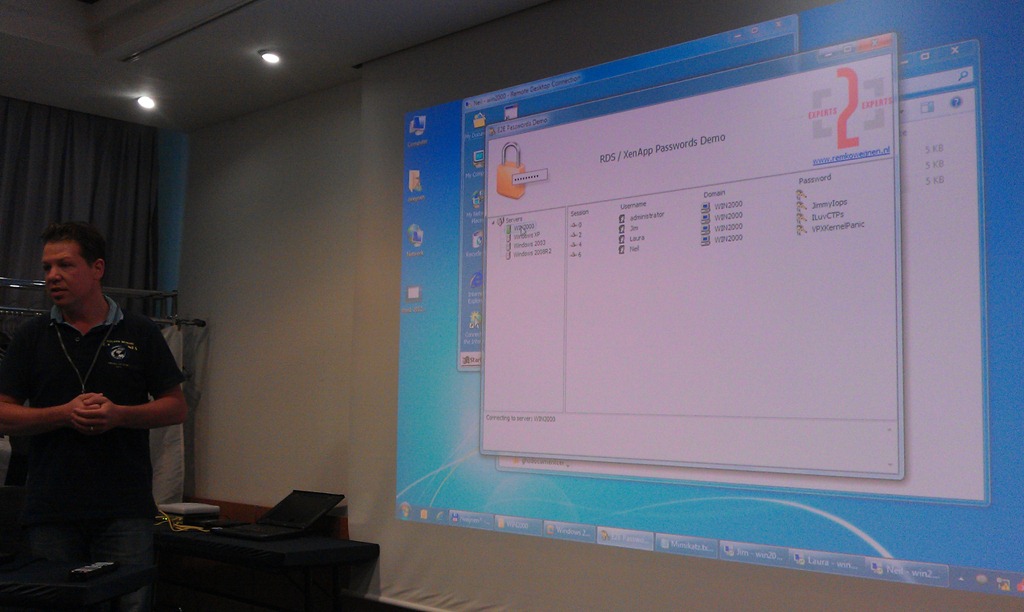 Apparently a 7-year-old can go and get any user’s password in plain text from as far back as Win2000. Remko even programmed his own tool that goes and gets them for you.

He even showed us the Matrix! ;)

All in all my first E2EVC was a really cool experience. I got to meet all the people I already knew from Twitter and such in person (which is always great!), talk to them, discuss with them and get a beer with them.

This was also the first time I presented in front of such a large and skilled audience and if there’s no too bad feedback, then this was not the last you’ve seen of me!

It’s a shame that I can’t make it to Hamburg in November, but I will definitely try to make Stockholm next year!