The Windows Management Framework 5 (WMF 5) Technical Preview also brought us PowerShell 5, and with that we got Desired State Configuration v2 (DSC v2). I just made that name up, I don’t believe it’s officially called DSC v2. 😉

With the introduction of PowerShell v5 and the class keyword it is now supported to define your custom DSC resources through a class. If you want to know a bit more about custom DSC resources in general, go have a look at my session slides from NicConf in Oslo here: /2015/02/powershell-dsc-session-slides-nicconf/

If you have previously looked at DSC resource modules you will have noticed that most of them (except for composite resources) have a %classname%.schema.mof file in their respective resource folder. The schema.mof file implements the resource class and its parameters. Using the classes keyword there is no longer a need for the schema.mof file. Woohoo, right? 😉 Even with the New-MofFile function on github I didn’t like that file. I mentioned I’m an IT Pro, right? Working in mof files makes me uncomfortable. The class already implements all necessary parameters and their data types.

In order to get a cmdlet based, as in not class based, DSC Resource working, one had to adhere to a given folder structure. If you didn’t follow that folder structure, your resource didn’t work, simple as that. 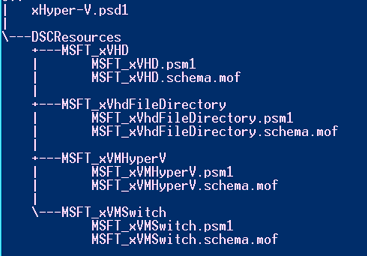 This implies something very interesting, by the way. You can now define multiple resource classes in one module file. Staying with my ConfigMgr resource module example. Where before I had multiple resources for example like this: 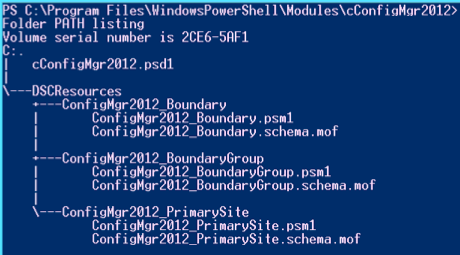 You can see that I have multiple resources in that one resource module, all underneath the DscResources folder. If you are using class based resources, that’s gone. All those resources move into the one *.psm1 file in the root.

What else does this mean? Technically not much, but from a process workflow point of view, if you didn’t have it before, NOW(!!!) you really need proper version control, like git(hub). You could easily end up in a situation where there are multiple persons working on the same module (at the same time) and overwrite each others work or change something which affects the other resources and you can’t roll back to a previous version.

This is pre-release software, so of course there are some gotchas around it. The release notes clearly state that there are experimental features included in this November release of WMF5 and “Develop with classes in Windows PowerShell” is one of them.

The next articles will describe how to build a class based resource, what to look out for and why it isn’t really that hard at all. I will also show the ConfigMgr resource in its end state at some point and will let you take part in my journey into dev-land. ;-)